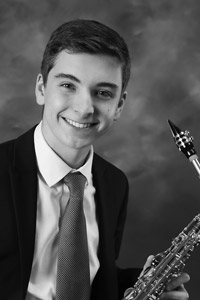 Jordan Savage, Leawood, is the Overall Winner and the Winds/Percussion Division Winner of the 2015 – 2016 Young Artist Competition. Jordan performed the Concerto in E flat Major for Alto Saxophone and Orchestra, Op. 109, by Alexander Glazunov. Jordan is the son of Dr. Rita Fisler and Dr. Cary Savage. He currently studies saxophone with Mr. Zach Shemon and with Mr. Joseph Hubbard. Jordan was awarded second place during the final round of the Kansas City Symphony Young Artist Competition on March 5th, and was voted the Audience Favorite. He was first chair in MMEA All District Wind Ensemble, first chair in the UMKC Midwest Honor Band 2016, first chair in John Phillip Sousa Honor Band, and has consistently earned the top score in District and State Solos and Ensembles festivals every year. He was a guest soloist in 2015 for the Kansas City Youth Symphony. He has performed as a member of the Interlochen Wind Symphony since 2014 and was in the Honors Quartet in 2016. Jordan has played with the Metropolitan Youth Jazz Orchestra since 2013 and studies jazz with Mr. Chris Burnett. He is currently a sophomore at Rockhurst High School where he maintains a 4.3 GPA and received the Presidential Academic Award for academic excellence. In his spare time, Jordan is a voracious reader, enjoys writing, computer programming, scuba diving, snowboarding, and studying Chinese. 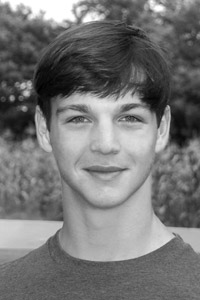 Cole Bellamy, Olathe, is the Voice Division Winner of the 2015 – 2016 Young Artist Competition. Cole, a baritone, performed “Ho Capito” from Don Giovanni by Mozart, and “Leave Me, Loathsome Light” from Semele by Handel. Cole is a junior at Olathe North High School and is the son of Michelle and Scott Bellamy. He currently studies with Joshua Lawlor and has been selected for the KMEA All District Choir and the KMEA All State Choir for the past two years as well as being selected as a member of the NAFME All National Choir. Cole sings with the Northwinds Choir at Olathe North and is a member of the Kansas City Acappella group, Sound Proof. In addition to his vocal studies, Cole also plays trumpet in the Olathe North Marching Band and flugelhorn in the Olathe North Wind Ensemble. He has been involved in musical productions at Olathe North including “The Culture House” as well as performing the role of Lurch in “The Addams Family.” Cole is a member of the National Honor Society and has received a Presidential Service Award for volunteerism. He is a medalist in the state German Competition and maintains a 4.4 GPA. In his spare time, Cole enjoys reading, travel, and learning new musical instruments. 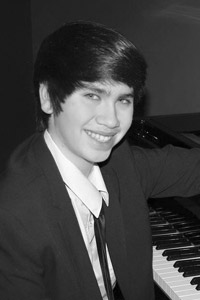 Andrew Aklagi, Overland Park, is the Keyboard Division Winner of the 2015 – 2016 Young Artist Competition. He performed the First Movement of the Piano Concerto in F sharp Minor by Alexander Scriabin. Andrew, the son of Tina Aklagi, began taking piano lessons at the age of five with Marina Brodko, and from 2008 he continued his studies with Tatiana Ioudenitch at the Ioudenitch Academy of Music & Arts. As a member of the Ioudenitch Academy, Andrew has participated in many master classes, performances, and competitions. In 2009, he received a Superior A-AA Solo Award at the 53rd Annual Festival in Overland Park, Kansas. Andrew received an Honorable Mention in the MTNA Junior Piano Division in the Kansas State Competition in 2014. The Ioudenitch International Summer Piano Academy selected Andrew to attend a series of master classes with Stanislav Ioudenitch in St. Petersburg, Russia. During the Academy, he performed at the Summer Music Festival “Toward the Vyborg.” In early 2015, he won third place in the Kansas City Symphony Young Artist Concerto Competition. He attended the Lake Como Summer Piano School and had master classes from William Naboré and Stanislav Ioudenitch. Andrew received third prize in the Ovation Young Artist Piano Competition (2015). 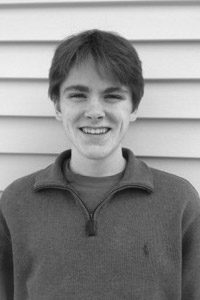 Liam Patrick Carroll, Overland Park, is the Strings Division Winner of the 2015 – 2016 Young Artist Competition. He performed the First Movement of Violin Concerto No. 1 by Max Bruch. Liam is a Senior at Rockhurst High School in Kansas City, and is the son of Robin and Mike Carroll. Liam began to play the violin twelve years ago, after seeing a violinist play on the TV show “Mister Roger’s Neighborhood.” He has played with the Kansas City Youth Symphony for nine years. He also has performed in the Missouri All State Orchestra for the past three years and has received a 1 rating at the Missouri All State Solo and Ensemble Competition for the past three years. Liam is currently a member of the Stringendo Chamber Music Program. He has attended music camps at Interlochen, Heartland Chamber Music Festival, and the Sunflower Chamber Music Festival. Liam was awarded Rockhurst High School Orchestral Musician of the Year in 2014 and also has received Academic Presidential Honors. In his free time Liam enjoys playing recreational baseball and basketball. He plans to attend college next year to major in violin performance and take pre-med courses.